While this newsletter series has said it many times before and in many different ways, it bears repeating (and perhaps some extra emphasis this time around): THE FED DOESN'T SET MORTGAGE RATES.

Here are several recent examples of the same thesis for those that really want to dig in to the underlying science and track record:

Worst Week For Rates in 6 Years. Fed Rate Cut Won't Help
The Fed Did NOT Cut Mortgage Rates
Why a Fed Rate Cut Might Mean Higher Rates
The Fed Will Hike, But Rates Could Keep Falling

If you're not the link-clicking type, here's another short explanation on why the Fed's rate cut had no bearing on mortgage rates.

The whole concept is a bit confusing due to the fact that mortgage rates definitely DO care about Fed policy in general, and about about unexpected changes in the Fed's rate outlook.  In that sense, the Fed matters very much to the mortgage world, but it still doesn't set mortgage rates!  In fact, it's not at all uncommon for mortgage rates (and Treasury yields) to move HIGHER after a Fed rate cut, and vice versa.  Indeed, that happened this week. 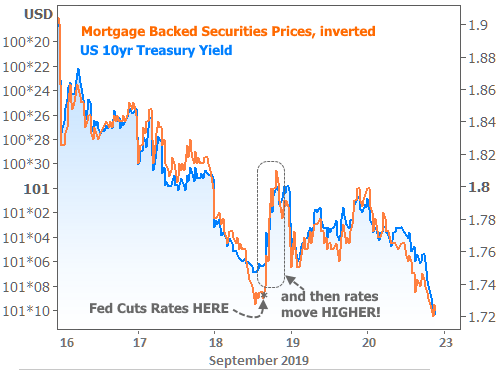 The chart above is not an optical illusion.  Rates were moving lower up until 2pm Eastern time on Wednesday when the Fed announced its rate cut.  Mortgage and Treasury rates then promptly moved HIGHER.  Even after a strong performance on Friday, mortgage-backed bonds (which dictate mortgage rates) never made it back to the levels seen before the Fed announcement.

There are 3 key ways to understand the paradox.

1. The Fed Rate is a Battleship in a River

The Fed meets to MAYBE change its rate only 8 times a year, barring emergencies.  Mortgage-backed bonds and Treasuries, on the other hand, can change thousands of times a day.  Mortgage lenders update rate sheets at least once every business day.  In short, mortgage rates and the bond market are FAR more nimble than the Fed and, to whatever extent they are going to take guidance from a Fed rate decision, they always move well in advance because Fed rate changes are very well-telegraphed these days.  Bottom line, mortgages react to the Fed rate cut before it ever happens, but even then, a Fed cut might not convince mortgage rates to move lower due to the other 2 factors.

2. The Fed Rate is a Different Animal Compared to Mortgage Rates

The Fed Funds Rate applies to loans with a term of up to 1 day (essentially last minute money shuffling between banks in order to ensure everyone has the money they need for the day if the previous day happened to create an imbalance).  Mortgages, of course, can be loans of up to 30 years.  Quite simply, investor preferences can vary greatly depending on the duration of a loan.  If you've heard about the inverted yield curve, that's a quintessential example of shifting investor preferences between longer and shorter term debt.  It doesn't get any shorter than the Fed Funds Rate nor much longer than mortgage rates.  Consequently, they move in opposite directions all the time.

3. Fed Policy is About Much More Than The Rate Itself

The Fed Funds Rate is only one of the aspects of the Fed's monitor policy communication.  Markets care about it, but again, they usually know what it's going to be ahead of time.  Even then, markets typically care much more about how the rate will move in the future.  To that end, the Fed's forecasts have consistently had an immediate impact on the entire interest rate landscape.  These forecasts are NOT known ahead of time, so there's an actual surprise factor on Fed day.  In this week's case, the Fed saw rates staying a bit higher than the market expected.  Thus, mortgage rates and Treasuries edged a bit higher in the short term.

In addition to the forecasts, the Fed's changes to market operations are also a big deal.  Think about the massive bond buying programs (quantitative easing) following the financial crisis.  The Fed had already cut its rate to 0-.25% when QE sent longer term rates plunging toward all-time lows.

The 3rd point above serves as great food for thought.  Remember, the Fed Funds Rate was pinned to the all-time low floor from the end of 2008 through the end of 2015.  Yet there were HUGE swings in mortgage rates during that time--irrefutable evidence that mortgage rates are taking cues from much more than the Fed's rate! 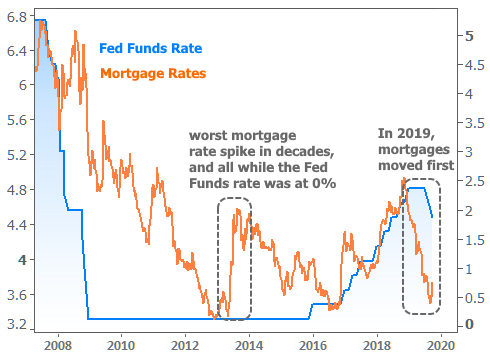 All that to say, please don't expect mortgage rates to ever have dropped by 0.25% on a day where the Fed cuts its rate 0.25%.

Although rates didn't fall on Fed Day this week, they did manage to improve compared to last week.  This may run counter to news articles you've seen this week citing Freddie Mac's weekly mortgage rate survey, but rest assured, that info is outdated by now.  The spike in rates occurred LAST week and Freddie's data finally caught up (as we advised here).  This week saw rates move sideways to slightly lower most days, with the average lender ending up nearly an eighth of a percentage point better compared to last Friday.

That keeps top-tier 30yr fixed rates easily under 4% whereas that didn't look like a given last week!  The positive effects on the housing market from 2019's stellar rate rally are still rolling in. Keep in mind that most of the following data references collection periods in August when rates were REALLY falling fast.  We should expect some pull-back in next month's data due to the big bounce in rates in early September.  For now though, let's revel in some major victories for housing-related data. 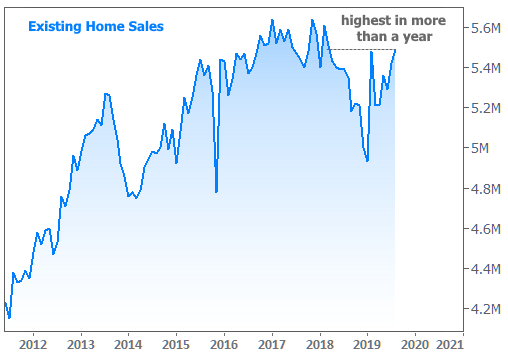 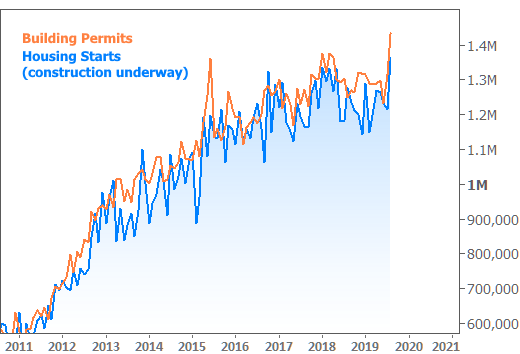 Highest builder confidence in more than a year. 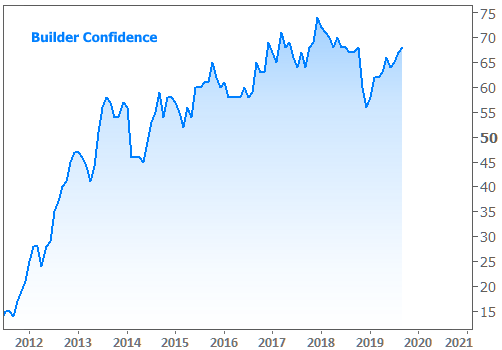 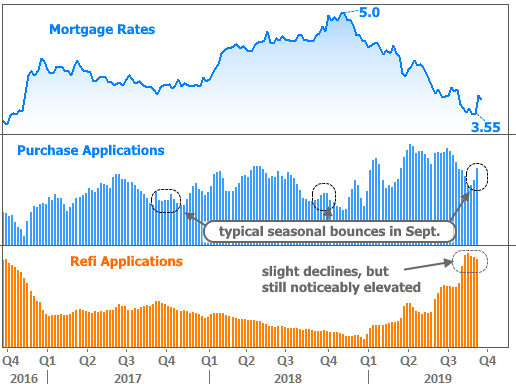 Next week brings a more active calendar in terms of economic data, and that's what interest rates will be focusing on more and more after this most recent Fed announcement (the Fed left it very much up to the data to guide the near-term policy path).  More housing data will hit the wires on Tuesday through Thursday, but it's Friday's inflation and manufacturing data that carry the biggest implications for potential volatility.  In addition, both stocks and bonds remain highly susceptible to any major updates on US/China trade relations.