The past 2 weeks have been fairly exciting in terms of interest rate volatility. This is the perfect environment for seemingly authoritative sources to get it dead wrong when it comes to telling you how rates are moving.

Without naming names, let's just say some very big players in the mortgage, real estate, and financial media markets are all running stories about mortgage rates moving higher this week.  I'm here to tell you the exact opposite is the case.

Given the apparent credibility and unanimity of those sources, you may be wondering if they're actually right and I'm wrong.  Thankfully, you won't have to wonder about such things after I explain WHY they're wrong.

Look closely at any of this week's "rates are higher" headlines and you'll likely find the story to be citing Freddie Mac's weekly mortgage rate survey.  This alone is the source of the confusion.  Freddie's survey is a longstanding and authoritative tracking tool for mortgage rates over time.  There's just one problem: it was never intended to track the sorts of timely rate movement that consumers are looking for.

Freddie is transparent about its methodology in the survey.  Responses are collected from multiple loan originators as to the best rates they can offer.  Freddie accepts responses Monday through Wednesday, but results heavily favor of Monday.

Despite that, the survey isn't released until mid-morning on Thursday.  That means much of the potential mortgage rate movement each week is never factored into the press release.  Naturally, all that movement can create discrepancies between Freddie and Reality, but it can get even worse.

In scenarios where rates are moving quickly in 2 different directions from one week to the next, the discrepancy is magnified.  That's exactly what happened this week.  Rates were indeed rising rapidly in the second half of last week.  Freddie's survey cut-off meant that most of that increase wasn't captured.  From there, this week's survey logically found rates to be higher on Monday, but it missed the nice improvements seen in the following 3 days. 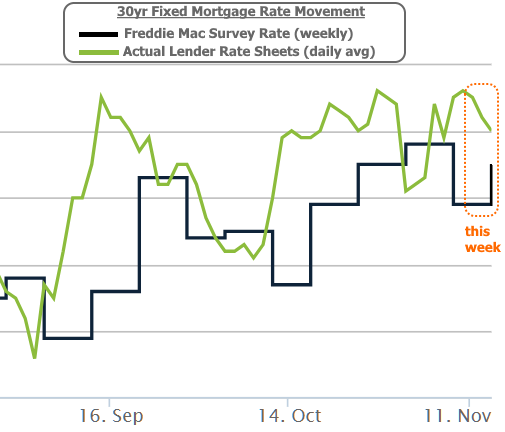 Mortgage rate trivia aside, why did rates rise last week and why are they falling this week?

Uncertainty is much higher than normal right now.  One of the biggest factors driving that uncertainty (and thus causing short-term volatility) is the ever-changing narrative on the US/China trade deal.  Last week's key headlines involved claims that previously announced tariffs would be rolled back as a part of the first phase of the deal.  That contributed to a sharp move higher in rates on Thursday, but there were a few compounding factors adding to the bond market panic (discussed in last week's newsletter).

In general, good news for the trade deal is bad news for rates and vice versa.  As such, all of the trade-related updates have created small pockets of volatility inside a broader trend, but it was concerns about that broader trend that did the most damage.  In short, it looked like we were on the verge of confirming a shift into a "rising rate environment" before this week's improvements provided a glimmer of hope. 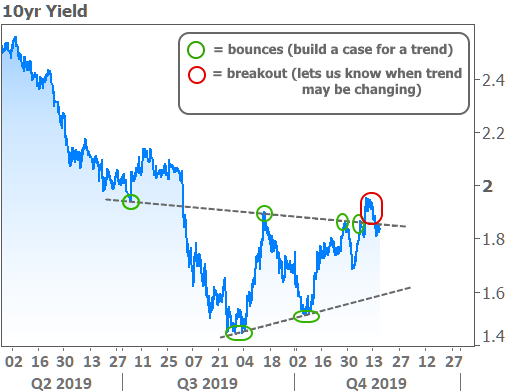 But just because rates snuck back under the dotted line in the chart above, it's not safe to assume we're out of the woods!  A combination of trade deal progress and reasonably resilient economic data means we're still at risk of shifting into a rising rate trend. Both stocks and bonds have been sending a similar message in recent weeks. 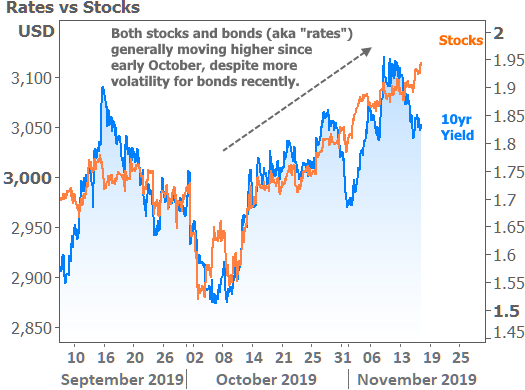 Economic data and trade deal updates will continue to play critical roles in shaping the road ahead--especially for rates.  With that in mind, next week brings a much more active calendar of data with Thursday and Friday's reports being particularly important (Philly Fed, Markit Manufacturing, and Markit Services Indices).