Certain years gain notoriety in financial markets for various reasons. Sometimes these are massive, individual reasons like 2013, the year of the taper tantrum. Sometimes there are separate themes that pull the market in opposite directions like 2016's Brexit /Trump election combo that pushed rates massively lower and then massively higher.

2019 has easily joined the ranks of those years that are notorious for one, massive, defining theme.  It will forever be remembered as the year of the trade war.  Granted, we can point to other developments throughout the year that moved the market, but those developments were all informed, mitigated, or complicated by trade war considerations.

Technically, the trade war began in April 2017 when Trump signed executive orders calling for tighter enforcement of certain trade policies and a review of US trade deficits.  In August, Trump and Chinese President Xi Jingping failed to make headway in initial trade talks, but that was about it for that year.

2018 was far more active and arguably more important than 2019 in terms of setting stage for trade war drama.  This is when when the administration began ramping up tariffs with threats of more to follow.  China retaliated in kind.  Markets may have paused to to express some uncertainty about all this in the first half of the year, but ultimately moved onward and upward (both in terms of stock prices and bond yields) after tariffs began rolling out without the world imploding. 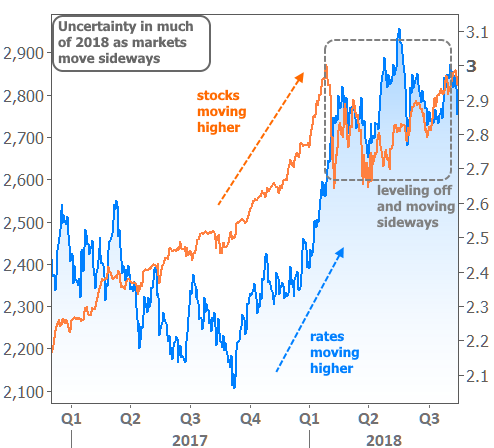 Things began to change rapidly in October 2018 when a slew of nagging macroeconomic concerns finally got the best of the stock market.  October and December went on to become the 2 worst months for stocks since the Great Recession.  Although the trade war wasn't the only headline in play during that time, it increasingly became the center of the conversation.

For instance, a global growth slowdown was a major concern--especially in China--and the trade war only intensified that concern.  Additionally, traders were increasingly worried about the end of the economic expansion in the US.  The trade war only fueled that fire.  The housing market was showing serious weakness and the trade war caused concern about the price of building materials (not to mention the wealth effect taking a hit due to stock losses).

This list could go on, but the bottom line is that massive economic uncertainty surrounding the world's 2 largest economies is going to spill over to just about everything.  Perhaps nowhere else was this as evident as it was in the Fed's much needed policy shift.  After hinting at it in December, the Fed changed its tone in January's statement, dropping its reference to  "balanced" economic risks and additional rate hikes.  Then in March, the Fed added "international developments" to its list of concerns.  This would go on to serve as a major justification for the Fed to consider actually CUTTING rates after hiking for 3 straight years.

The bond market (aka "rates") realized the Fed was becoming friendly again and that global economic risks could materialize in such a way as to push rates much lower.  The trade war was at the top of the list of underlying justifications.  The stock market reaction was a bit different.  Stocks lost so much ground at the end of 2018 that a friendlier Fed (and the prospect of lower rates) helped fuel a steady recovery.  Beyond that, stocks managed to find support from decent corporate earnings and ongoing strength in the consumer sector.

This led to a situation where stocks consolidated in a triangular pattern for most of the year while rates moved almost exclusively lower through August.  Unsurprisingly, the biggest move of the year for rates coincided with the biggest US/China tariff announcement in early August.  It was so big, actually, that it forced traders to question the wisdom continuing to buy bonds with rates already close to all-time lows when the global economy could conceivably get a massive and immediate second wind due to a trade deal. 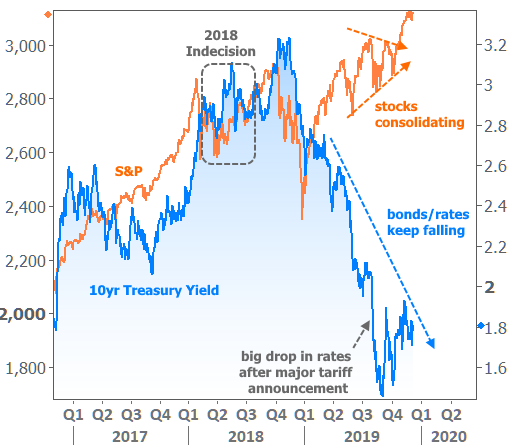 By the end of October and for much of November, rates appeared less and less willing to react to these back-and-forth trade updates, but they seemed to reserve the right to react quite a lot to certain examples.  While this may be frustrating and confusing at first glance, it's actually pretty simple.  The market's reaction to the trade war was never about the headlines themselves, but rather, the actual economic implications of the headlines.  Vague, general, qualitative trade war tweets/headlines are less and less likely to move the needle.  But if Trump tweets about a new, specific, quantitative change, markets are still very willing to react.

Ultimately though, it will be the ACTUAL impact on the global economy that sets the tone for financial markets.  Between now and then, both stocks and bonds can only really guess as to what that will look like.  The only safe bet is that dry ink on any meaningful trade agreement will lead traders to guess that rates should be higher than they are right now.  Fortunately, most of the market is assuming that some sort of deal will eventually happen (and that's why rates aren't well into all-time lows right now), but there is plenty of pain left for confirmation of a deal, when and if it comes.

Perhaps the most insidious aspect of trade war hyper-focus is that it causes markets to question the relevance of other economic data.  The few big ticket economic reports that reliably push rates higher and lower are still able to push rates higher and lower, but not as well as they used to.  Sometimes we even see markets go in the opposite direction to that suggested by the economic data simply because a trade-related headline had a bigger impact around the same time of day.  As frustrating as that may be, it stands to reason.  After all, the economic difference between a healthy US/China trade relationship and a nonexistent one is massive.

Does this mean we don't need to be concerned at all with econ data until after the trade stuff is figured out?  Not exactly.  Again, it will still have an impact if it's the right report and if it falls far enough from expectations.  Rather, we should simply be prepared to see less of a reaction than normal to traditionally important market movers (such as tomorrow's jobs report!).

The bottom line for this little 2019 trade war year in review is this: the importance of the trade war--past, present, and future--cannot be overstated.  While some headlines may be ignored, the right headlines can still rock the market.  More importantly, it's going to be hard for bonds/rates to go anywhere very quickly without a better idea of how the trade deal is coming together (or not).  Just be sure your understanding of "not going anywhere" is on the appropriate scale.  To the bond market, half a percentage point over 5 months is a very narrow range, but on the average mortgage, it's roughly $100 per month.