It's effectively impossible to read, watch, or listen to the news this week without the impeachment taking center stage.  While this sort of thing may be interesting to network news producers, it's of almost no consequence to financial markets--let alone the housing and mortgage market.

Granted, it would be a different story if there was a reasonable chance of Trump being removed from office.  But that would require a 2/3rds vote in the Senate--something that borders on impossible not only for Trump, but for any president in the modern political environment.

Because of that, markets couldn't care much less about the impeachment proceedings when it comes to informing the direction of their next move.  At the very least, I can tell you they're not trading any differently based on the risk Trump is removed from office.

There is a bit of a paradoxical effect to consider, however.  Some political strategists, pundits, and relatives visiting for the holidays have suggested that a failed attempt to remove the president from office only strengthens his chances of reelection in 2020.  To whatever extent traders share that view, that COULD have an impact on the way they're trading.  Sorting out the nuances of that impact is a complicated matter, but one might generally expect Treasury issuance to remain elevated and the tax code to remain relatively unchanged.  Neither of those things have been great for rates in and of themselves.

But if the tax code and Treasury issuance put upward pressure on rates, why did rates fall for most of 2019?

Great question!  First off, much of the impact was felt in 2018 with rates hitting the highest levels since 2011 by the end of the year.  2019 ended up seeing pervasively lower rates for several reasons.  One of the biggest reasons was the uncertainty surrounding the US/China trade war.  If last week's phase 1 trade deal announcement is an indication of things to come, rates could face additional upward pressure in 2020.  To be sure, that risk is weighing heavily on the minds of market participants as they ponder a big picture bounce similar to those seen in 2013 and 2016. 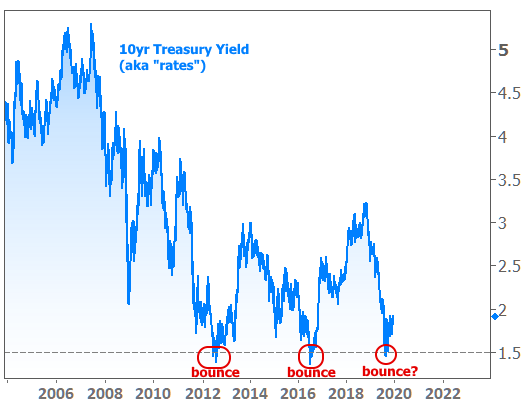 Softening that blow, to some extent, is the fact that deescalation of trade tensions would also help the stock market continue pushing all-time highs. 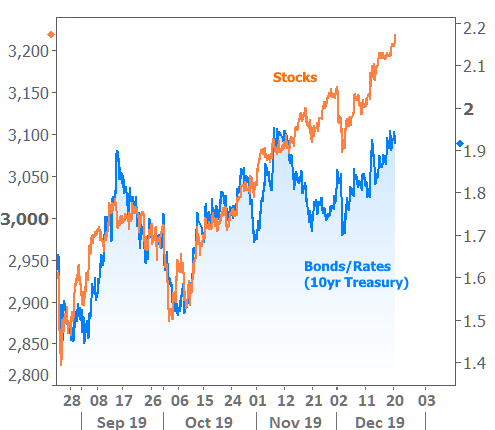 Homebuilders also have an eye on the trade situation as tariffs can have a small but noticeable impact on certain building materials.  The improvement in trade relations with China is only part of the story though.  In fact, it's probably the smaller part compared to the recently announced USMCA agreement.  Homebuilders have generally praised several improvements over NAFTA, but the biggest benefit is that a part of the code that allows for the import of cheap Canadian lumber remains unchanged.  Like anything, there are tradeoffs.  The US lumber industry is not a fan, but homebuilders are the happiest they've been in more than 20 years. 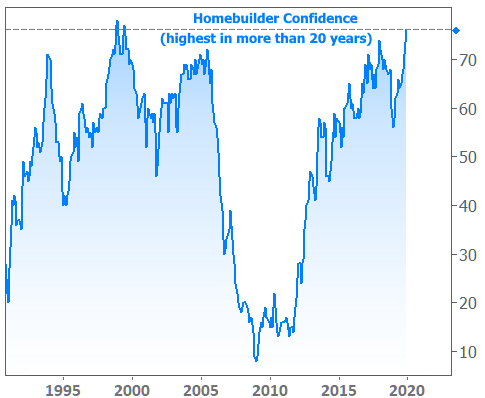 In fairness, the promise of relatively cheaper materials isn't solely responsible for this phenomenon.  Low interest rates have helped as has the fact that NEW homes are better able to adapt to shifts in affordability trends.  That's a fancy way of saying that builders are able to build smaller homes on smaller lots whereas the average "existing home" has a wider footprint on a bigger piece of land.  This comparative advantage helps explain why construction numbers continue to improve while Existing Home Sales have leveled off. 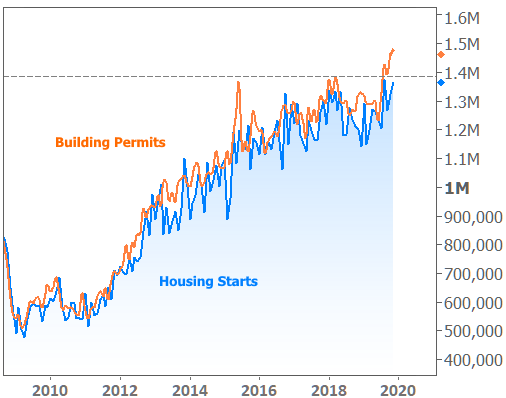 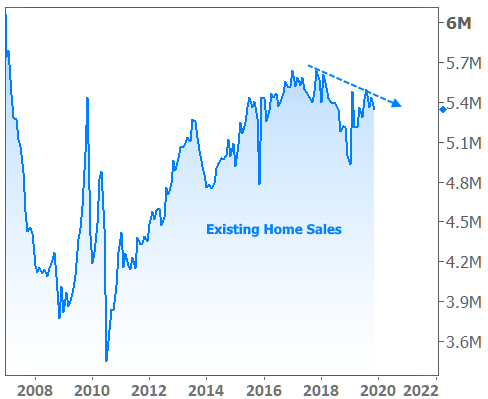 But there's an even simpler, even better way to reconcile the variation in trajectory between construction and existing sales.  Simply put, construction lost a lot more ground during the mortgage meltdown, so it has more room to run before catching up to the rebound in existing sales. 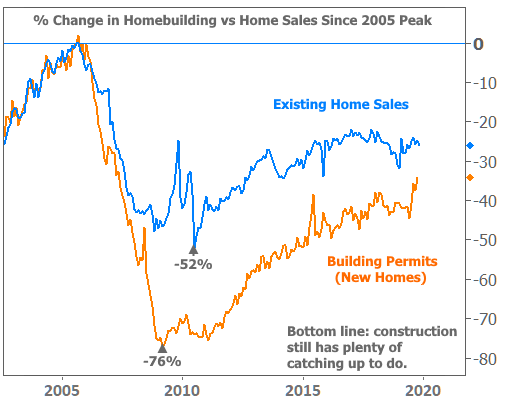 In other news this week, mortgage rates pushed back up to their highest levels in more than a month, although that's not quite as troubling as it sounds given the exceptionally narrow range over that time.  For reference, that range has been about an eighth of a percentage point (0.125%) between the lows and highs going all the way back to mid-October.

Market movement between now and the 2nd week of January will be unpredictable and perhaps illogical as market participation falls off dramatically for the holidays.  Even if we do see movement in stocks and bonds, there's no guarantee it will have any bearing on the beginning of 2020.  For that, we'll need to see how economic data is shaping up in the new year and how the US/China trade negotiations progress.