Mortgage rates bounced at 6 month lows early last week and moved higher at a faster-than-normal pace through the middle of this week. They've been slow to recover, but Friday went a long way toward solidifying the short-term ceiling.

Economic data inspired the move on Friday with Consumer Sentiment falling to the lowest levels since 2011, just edging out the lows seen at the start of the pandemic.

The University of Michigan, which has conducted the survey for decades, called out the "stunning loss of confidence" as being distorted by consumers' emotional response to the resurgence of the pandemic, ultimately concluding "consumers will again voice more reasonable expectations" in the coming months. 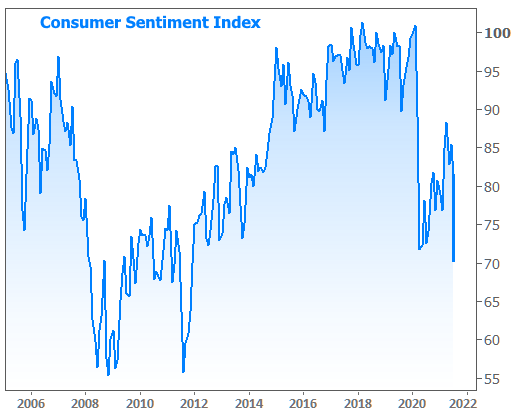 In other words, they think the number is significantly lower than warranted by actual economic conditions, assuming the recent spike in cases attributed to the delta variant gives way to better numbers in the coming weeks.

The bond market wasn't interested in that qualification.  Bonds tend to improve (higher prices and lower yields/rates) when economic data is downbeat and Friday's sentiment data was no exception.  10yr Treasury yields dropped almost 0.08% to end the week at 1.283%.

The prices for the bonds that underlie mortgage rates moved higher as well, thus allowing mortgage lenders to offer slightly lower rates.  But lenders aren't typically eager to make big changes on Friday afternoons.  As such, mortgage rates have only officially recovered a small portion of the recent losses.  Things could improve next week if the bond market stays near current levels. 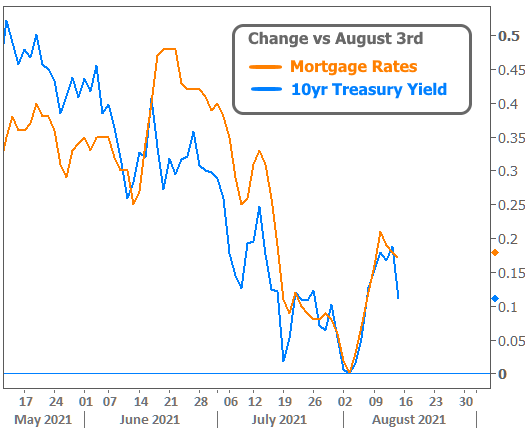 If rates are able to remain near current levels, it will help the housing market avoid a sharper deceleration in home price gains.  In an update this week, the National Association of Realtors said it's seeing  evidence that home prices are finally starting to come off the boil.  To be clear, they are calling for prices to keep moving higher--just at slower pace.

Even though lumber prices have plummeted recently, the National Association of Homebuilders said other materials remained high enough to nudge residential construction input prices to another long-term high last month.

In mortgage-specific news, Fannie Mae--one of the government-sponsored enterprises that buys or guarantees a majority of the mortgages in the US--made a move that will help more renters qualify for mortgages.

Fannie will now evaluate rental payment history and other recurring obligations that don't show up on normal credit reports. The process requires borrower consent and will scan bank statements for recurring payment consistency.  Missed or inconsistent payments will not have a negative impact.

The week ahead brings several housing-related reports including builder confidence on Tuesday and New Residential Construction on Wednesday.  July's Retail Sales Report (Tuesday) is the headliner in terms of traditional market movement potential, but traders may not be eager to accept a much higher number in light of the delta variant and the obvious impact on consumer attitudes.