There were 3 distinct parts to this week. The first part consisted of the entirety of the first 3 days.  Rates didn't move much as the market continued to digest the big spike seen at the end of last week.

The median forecast among economists called for a fairly big increase to CPI with the more important "core" component (which excludes food and energy) rising from 5.5% to 5.9% in January.  Traders felt this number was a bit too high, and were hoping to see something under 5.9%.  That likely would have allayed fears that the Fed would hike rates by 0.50% in March as it finally moves up from the 0.00-0.25 lower boundary. 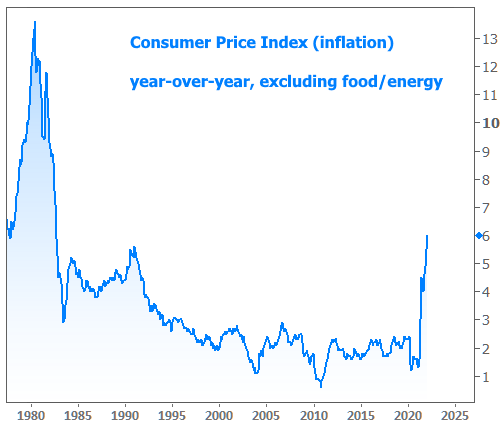 Following the data, Fed Funds Futures for April (the market's way of betting on Fed rate hikes) quickly moved to price in a 0.50% hike.  The probability increased to over 90% from roughly 50% the day before.

It's worth noting that part of the motivation came from comments from St. Louis Fed President James Bullard's comments early that same afternoon.  Bullard took a wildly more aggressive stance than any of his colleagues, saying he'd like to see a total of 1.0% of rate hikes by July 1st, roughly double the consensus.

While Bullard received a lot of flak from market watchers as being responsible for undue drama, it was the CPI data that did most of the damage.  Well before Bullard's comments, CPI had pushed 10yr Treasury yields up to the important 2.00% technical level--a psychological boundary that, if broken, stood a chance to prompt more weakness in bonds.

Moreover, any time such a technical level is broken, there's a risk is will act as an inflection point (which is why key levels are often referred to as "pivot points") that blocks future progress back toward lower rates.

Yields did indeed break above 2.0% and nearly hit 2.03% before we ever heard from Bullard.  Markets emphasized the importance of the 2.0% barrier the following morning as they refused to break back below despite the weakest Consumer Sentiment reading in more than a decade. 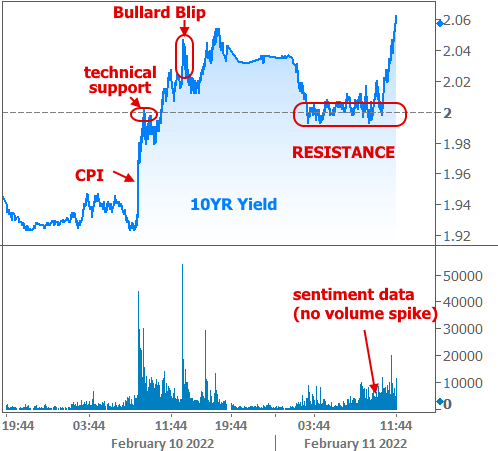 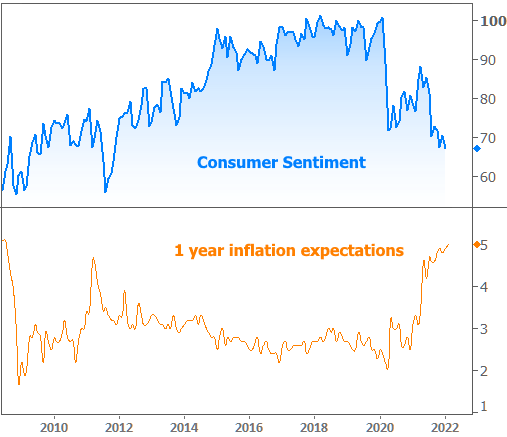 This made a bad situation worse for mortgage rates as the average 30yr fixed had just crested 4% for the first time since May 2019 on Thursday.  Notably, the weekly Freddie Mac rate survey also came out on Thursday, showing a rate of 3.69%.  This was extremely far from reality from the moment it came out for all usual reasons (read all about them HERE). 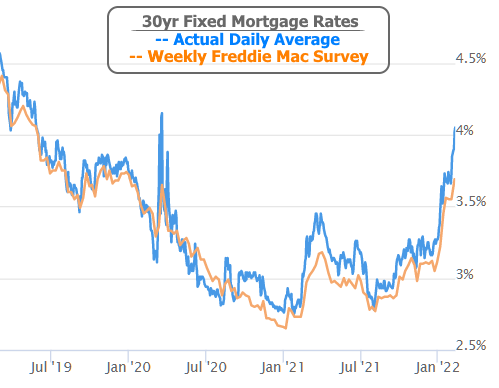 The third and final part of the week arrived on Friday afternoon around 1:30pm.  That's when news broke regarding prospect for a Russian invasion of Ukraine effective immediately.  There's been lots of press coverage of this conflict over the past several months, but this was the first time a headline had this level of impact (indeed, all of the other headlines have had basically no impact when it comes to a big, immediate shift in yields and volume).

PBS's defense correspondent Nick Schifrin reported that three officials said "the US believes Russian President Vladimir Putin has decided to invade Ukraine, and has communicated that decision to the Russian military," and that invasion was expected to begin next week following "two days of aerial bombardment and electronic warfare."

Whether this happens or not, markets took it seriously.  In a few short hours, the entirety of the week's damage was erased as far as Treasuries were concerned. 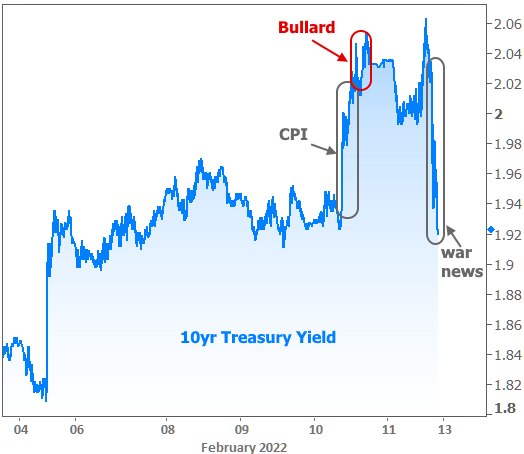 Fed Funds Futures even managed to move almost all the way back to their previous stance on the size of the March rate hike. 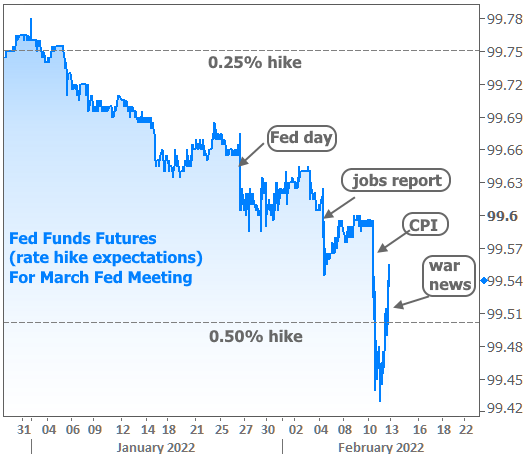 Unfortunately for mortgage rates, the Treasury market is a much bigger beneficiary of market panic when it comes to geopolitical risk.  In other words, mortgage rates were not so quick to retrace this week's steps.  It would be hard to visualize that when looking at a short term chart of mortgage rates themselves, because they are only updated a few times a day, even on volatile days.  Instead, we can chart the rate implied by mortgage-backed securities (MBS), which is what mortgage lenders use to determine rates anyway! 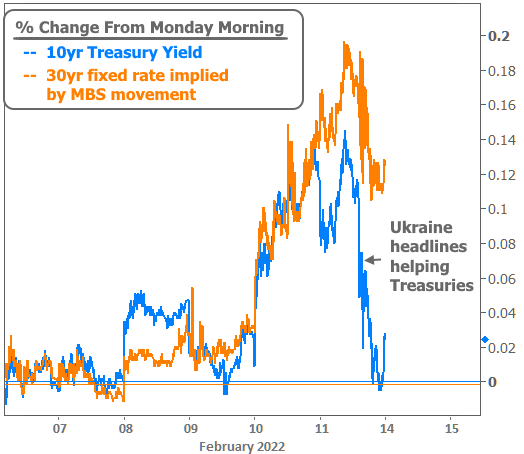 Long story short, even after the bond market bounced back on Friday afternoon, MBS were only a fraction of the way back to levels from earlier in the week.  As a result, mortgage rates remained just over 4% on average, despite falling from the higher levels seen Friday morning.  Please note: all references to mortgage rates are for broad averages among multiple lenders.  There is a high degree of stratification between lenders and loan programs at the moment.

Next week brings several economic reports that have been important at times in the past.  Chief among these is the Retail Sales data on Wednesday morning.  That said, rates are preoccupied with the Fed policy outlook and none of next week's reports will be remotely as important as CPI was.  In fact, many traders are already talking about the next CPI report in early March as it falls just one week before the Fed's next big policy meeting.  In the meantime, any significant escalation in Ukraine could put additional downward pressure on rates/yields, but the mortgage market would suffer from the same underperformance issues seen on Friday.