Financial markets remain transfixed by seemingly insignificant updates relating to US/China trade negotiations. For those who follow markets closely, this can be exasperating at times, but it's happening for a good reason.

If we only look at shorter-term market movements (like the chart below with this week's stock prices and bond yields), we might conclude that neither side of the market knows where it wants to go and that they're taking turns following each other and/or waiting for bigger inspiration.  But that's actually not an unfair statement. 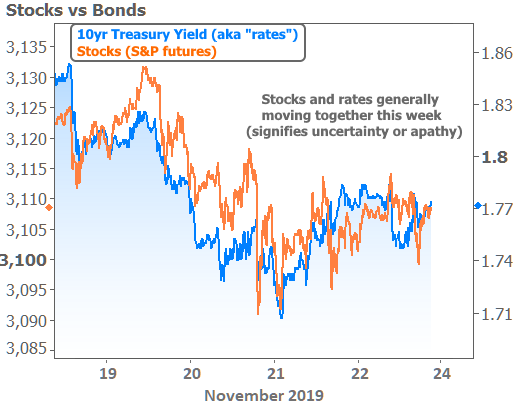 2019 has been a big year for both stocks and bonds.  Both have moved to very strong levels (high stock prices and low bond yields) and have covered a lot of ground to get there.  The uncertain fate of the trade deal was a major factor helping rates move lower and preventing stocks from breaking to all-time highs earlier this year.  But now that a "phase 1" deal is at least being discussed as a possibility, stocks have moved higher while rates have reconsidered the long-term lows seen in early September.  With this in mind, the divergent performance between stocks and bonds in the bigger picture makes more sense. 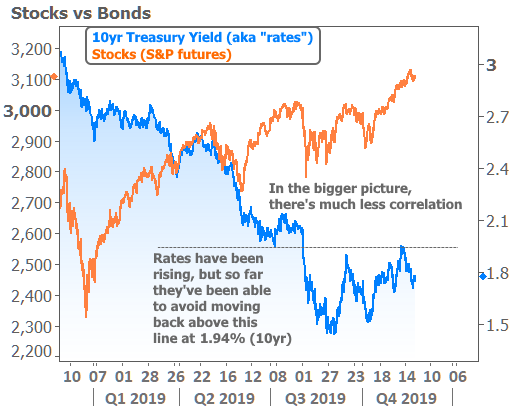 Notably though, rates aren't panicking, and have actually managed a modest but noticeable winning streak over the past 2 weeks.  In terms of mortgage rates, this translates to average 30yr fixed rates improving by an eighth of a percentage point to the lowest levels since October 31st.

As far as rate rallies go, that qualifies as just a bit longer than average and just a bit better than average, but it's good to keep in mind that it comes at the expense of a more significant move toward higher rates that lasted nearly the entire month of October.

In the bigger picture, however, rates are staggeringly lower than they were this time last year.  Despite having risen from multi-year lows in September, we're still in a very solid ball park. 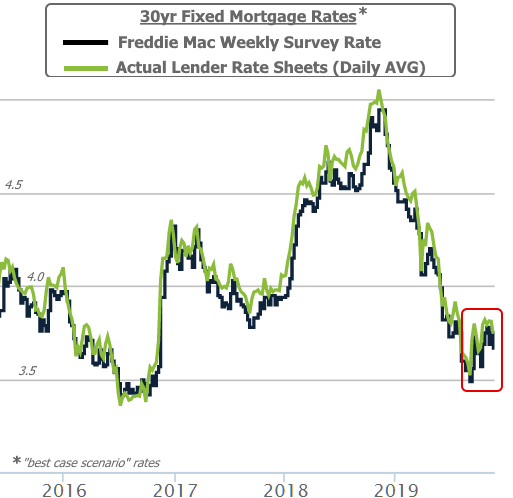 The impressive drop in mortgage rates seen in the chart above has done wonders to help the housing market get back on track.  There were multiple housing-related reports out this week and everywhere we look, there are reasons to be excited.

Existing Home Sales didn't quite break their recent highs, but they're back in line with the highest levels since before the housing crisis. 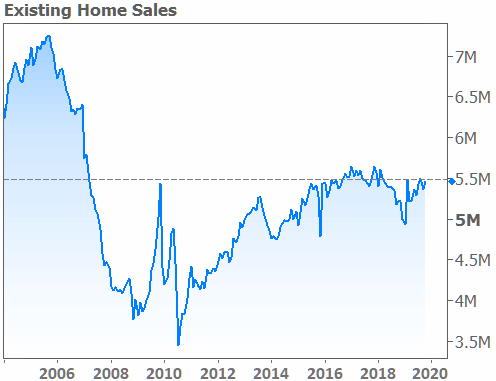 Unsurprisingly, low rates and strong sales have had a positive impact on builder confidence as seen in this week's Housing Market Index from the National Association of Homebuilders. 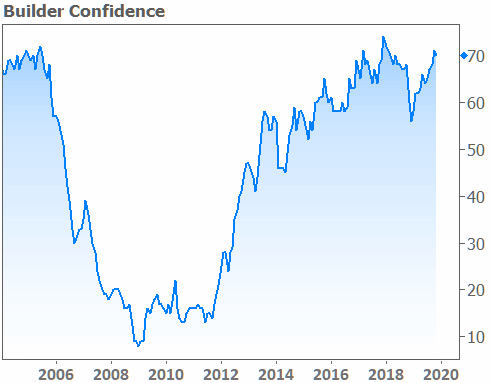 In this week's New Residential Construction report, building permits surged to their highest levels in more than 12 years. 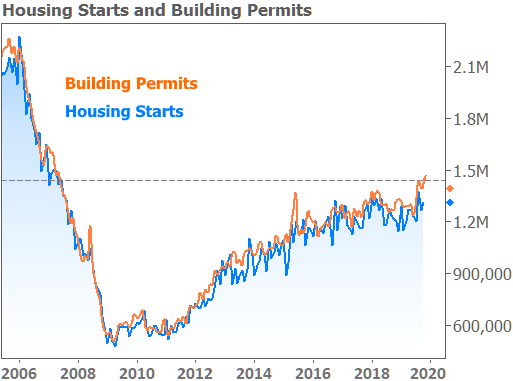 And on a mortgage-specific note, application activity has remained undeterred by rising rates.  Granted, refinance demand has leveled-off, but it remains in territory that's 150% better than the same time last year.  Purchase applications are winning in a different way.  While they're only up about 14% year over year, that's the highest growth rate since 2016. 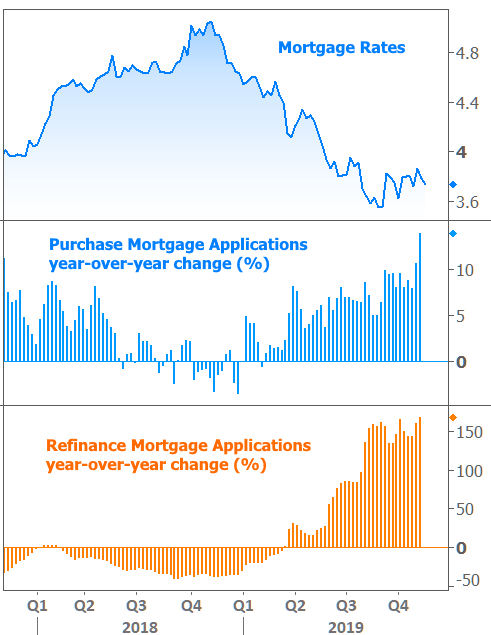 The extent to which the good times will keep rolling depends heavily on global economic momentum.  And global economic momentum depends heavily on the outcome of the US/China trade negotiation.  It's anyone's guess as to how long that will take and how it will ultimately look, but no one is expecting a sweeping conclusion to happen in the next few weeks.  That's precisely why we've seen rates level-off and push back, but NOT in a panicked way.

Be warned though, if progress materializes in trade negotiations and especially if economic data can manage to improve even before a trade deal is shored up, rates are ready and willing to move higher at a quicker pace.  Bottom line: take advantage of what we have today or at the very least, be ready to act if it looks like the rate landscape is shifting.

END_OF_DOCUMENT_TOKEN_TO_BE_REPLACED

“We exist to make a difference in people’s lives by providing the right mortgage products."

Scott is the Portland Mortgage Coach, an Ideas Machine, a Revolutionist and a Rock N' Roller! With over 20 years in the Mortgage Industry. Scott Munds is #1 a family man. Married over 25 years to his lovely wife Susie with four amazing children (and new Grandson!) all living in the Portland Metro area. He enjoys spending time in the community serving with the Community Action group and the Blanchet House giving to the homeless. Scott has a serving heart! In business, Scott is known as a straight shooter full of Integrity and is a Master at the Mortgage Loan Process. With a legendary reputation in the mortgage and real estate industry. Scott has earned an extensive following of Real Estate agents, Clients who love Scott and an Avant-Garde mind that attracts Respect inside and out of his business. If you are looking for the Nordstrom Mortgage Loan experience… you have found the right guru and mortgage team to Open the Door to your new home!