Interest rates have been on a tear. They've fallen faster and farther than at any other time in the past 8 years. By some measures, they've managed to maintain positive momentum for as long as they ever do. This naturally begs the question: is it time for a bounce?

Investors expected some clarity on that question from this week's economic data.  This was the first look at several of the most important reports since the last Fed meeting.  At that meeting, the Fed acknowledged investor expectations for rate cuts in 2019, but on the condition of lackluster economic data.

In that regard, this week provided some massively mixed messages.  At first, it looked like the data would indeed endorse a continuation of the trend toward even lower rates.  The Institute for Supply Management (ISM) released its Purchasing Managers Indices (PMIs) for the manufacturing and non-manufacturing sectors on Monday and Wednesday respectively.  Although they weren't very far from forecasts, both qualified as lackluster as they did nothing to challenge the notion that we're in one of the weaker patches of the economic cycle. 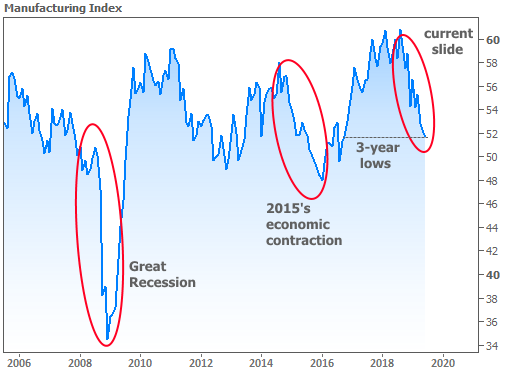 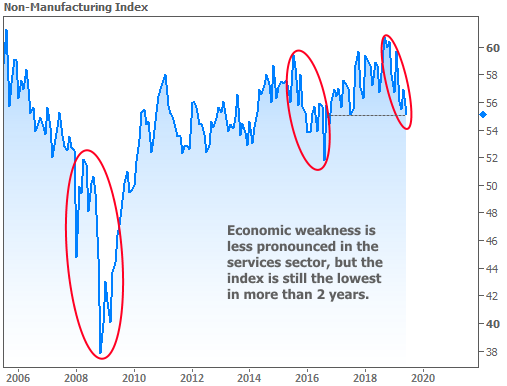 ISM PMIs are two of the most important monthly economic reports in terms of the ability to influence interest rates.  They're second only the Employment Situation (aka "the jobs report" or "NFP" for its headline component: nonfarm payrolls) and occasionally the ADP Employment Report, which can be used as an early indicator for NFP.

ADP and NFP were more closely watched than normal this week because both were quite a bit lower than normal last time around.  ADP was first up on Wednesday.  While it didn't convey quite as much weakness as last time, it was weak enough to keep rates at long-term lows (and to keep anticipation running high for Friday's NFP number). 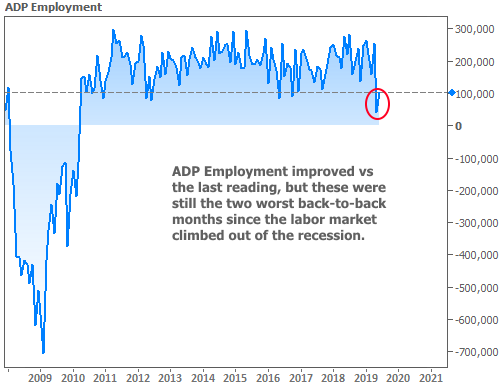 NFP also bounced back, but in much grander fashion than ADP, coming in at 224k compared to 72k last month--handily beating the median forecast of 160k. 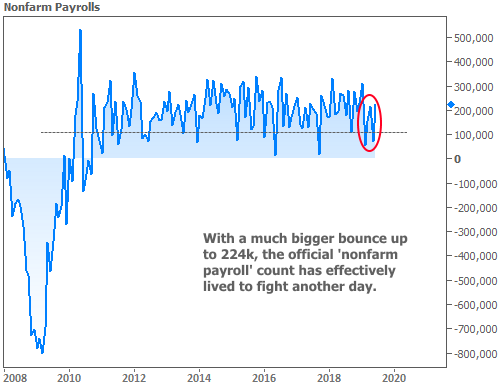 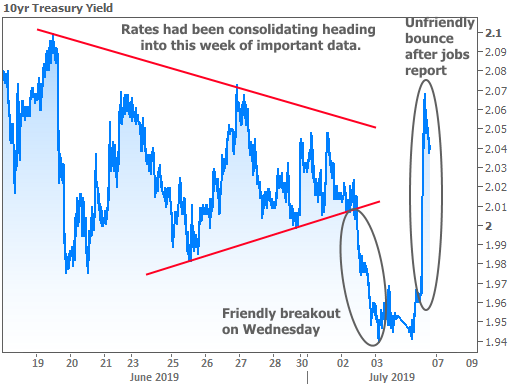 At first glance, that may look like defeat for fans of low rates.  Indeed, that may prove to be the case in the coming days.  But Friday's rate spike stalled out at a level that leaves some room for hope.  In terms of the 10yr Treasury yield (the best benchmark for momentum in long-term rates like mortgages), rates bounced perfectly on the ceiling that's been intact since the June 19th Fed meeting. 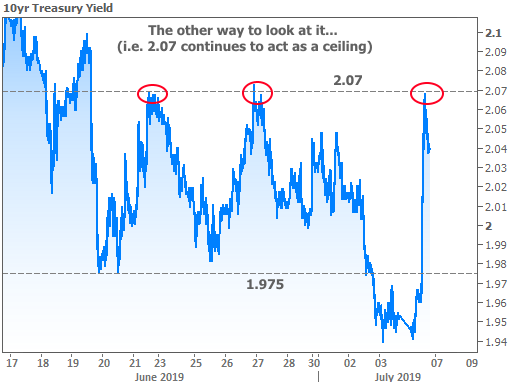 All that to say that although the jobs report raises doubts as to just how eager the Fed should be to cut rates, investors aren't giving up on the idea easily.  That makes good sense considering the economic picture is too complex for a single economic report to adequately capture.  The jobs report may remove some apprehension about a shift in the labor market, but it doesn't magically erase weakness seen in other reports.

The most important repercussion of this week's data is for the Fed.  Had NFP been weak, it would have been an easy call for the Fed to cut rates in their meeting at the end of July.  Had the ISM and ADP data been as strong as NFP, leaving rates unchanged would have been a similarly easy call.  As it stands, the implication is somewhere in between.  We'll have a great sneak peek at the Fed's thought process in light of this data when Fed Chair Powell delivers his semi-annual congressional testimony on Tuesday and Wednesday next week.